The CAS-14 Automatic Combat Shotgun is used by Red Faction during Commonwealth Civil War, during the uprising against the Commonwealth and later Molov-led Nanotech Enhanced Forces.

This military-grade shotgun is capable of delivering extremely powerful automatic blasts and inflicts the most damage at close range. Its accuracy and effectiveness decrease significantly when the range to the target is increased, rendering it almost useless when firing at targets more than fifty meters away.

The CAS-14 is also capable of discharging incendiary shells as a form of alternate fire, making it a very effective antipersonnel weapon. However, the incendiary shells cannot ignite heavily armoured enemies (such as the Sopot Elite Guard), making them only about as effective as the standard buckshot against those targets. In addition, these special shells have to cycled via pump action, limiting the rate of fire of the weapon by a considerable degree. 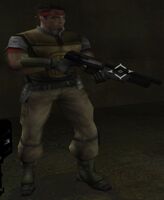 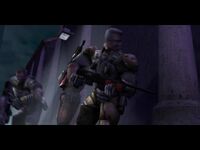 Shotgun on the floor