The CAR-72 Military Assault Rifle is an issued rifle used by both Red Faction and Commonwealth during the civil war.

This semi-automatic is designed to offer all the benefits of a full-sized rifle in compact form. It is capable of firing a three round burst or a less accurate fully automatic onslaught.

The high-velocity, armor-piercing shells inflict massive amounts of damage on unarmored targets and will exact noticeable damage on armored opponents as well. The assault rifle is a standard-issue weapon for the Commonwealth troopers and grunts, but were also used by Red Faction in the later stages of the civil war picking up from the dead soldiers against Molov-led Nanotech Enhanced Forces. 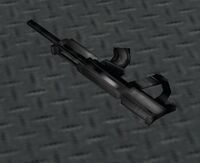 Rifle on the floor

Alias with the wooden furniture version of the CAR-72 in a cutscene
Community content is available under CC-BY-SA unless otherwise noted.