Berserker are brute form of the plague as they can overpower their victim due to its strength as so much energy flowing their body.

They are so full of energy that they explode when they die. Quickly kill or avoid Berserkers that are near death as they will follow you as they are about to explode.

The Berserker has three attacks at its disposal the electrical berserker has a sticky timed explosive that can be deflected by the shell, while the Fire berserker has a large fire explosive that isn't timed and can also be deflected by shell. The second attack it has is to use a close ranged melee bash that can potentially send the player flying some feet away and causing the player to be vulnerable. The third and final attack is a suicidal charge at the player were it will either detonate on you, the enemy, or just explode due to the timer it possess.

There are two variants of the berserker the green electrical version which appears to be the most common. the fire version which is more flammable and has a larger explosion on death and an increased explosive radius. It is possible that these beasts are the plague equivalent to artillery, with the electrical beserkers representing mine layers and the fiery ones representing mortars.

The Berserker is first seen during the transportation of the ambulance and squad APC's, it destroys one of the squad APC's then proceeds to engage Darius.

The best way to kill them, is with long-range, high-damage weapons like the Pulse Cannon or Rocket Launcher. If you get too close, use Impact and then a shotgun. When it is dying, dodge backwards as the explosion can damage you quite a bit.

Berserker appearance after blowing up the bridge during the cutscene.

A standard variant of Berserker appearance at the cutscene after ripped out of colonist head. 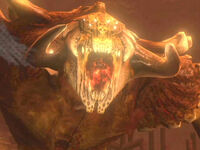 Berserker face close up.
Community content is available under CC-BY-SA unless otherwise noted.