Bastion is an underground colonist city founded after the destruction of the Terraformer and serves as a stronghold for the Red Faction. The city is supported by a vast network of infrastructure such as the Deep Freeze 9 Water Purification Plant and an array of water pumps like Pumping Station #42 as well as transport networks including elevators and monorails.

The city was established after the fall of Terraformer.

Bastion also boasts a large marketplace, including store chains like Loco Parker Tacos, Volition Value, Oasis, and several Joe Cola Smith General Stores. It serves as a central hub for the underground mining colonies formed after much of the Martian population is forced to retreat from the surface of the planet. The main military garrison for the city was the Bastion Red Faction Barracks.

Like many other settlements including Diggstown and Greenbelt, Bastion is devastated by the Plague Armageddon, leaving the colonists to be abandoned.

Early concept of Bastion in surface before change the location to underground. 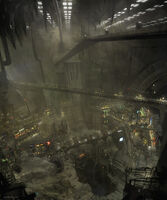 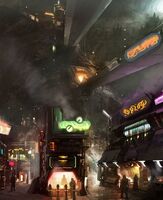