Axel Capek (unknown - 2075) is the secondary antagonist of Red Faction and the head scientist of the Ultor Corporation prior to its fall in the First Martian Revolution.

Capek work is broad-ranging, ingenious and singularly immoral. He experiments on animals and humans, created mutants, releases a plague upon the miner population which cripples, disfigures and kills countless innocents, and accomplishes it all through his genius and unparalleled pioneering of nano-technology which, despite his death, would continue to alter the future of Mars centuries later.[1]

Many of his breakthroughs, however, came from the MASTers expedition in 2067 down an ancient shaft whereupon he found a hibernating alien species known as The Plague. After being studied, the aliens awake, slaughtering the scientists.[2]

With the defeat of Ultor in 2075 AD, many of the scientists who work for Capek flee the victorious Earth Defence Force and Red Faction. Hiding inside the ruble of ruins and become the Marauders, safeguarding what remains of his research - including the Nano Forge and the Accelerator at Mount Vogel. Most of the mutants and abominations spawned by his research were inevitably destroyed.[3]

Axel Capek cares little about how many people suffer or die to bring about his breakthroughs, because his only guiding star was the advancement of science.[1]

Colonel Masako also describes him as an egomaniac.[1]

Capek appears extremely short and much of his body is replaced with cybernetics (notably his arm and his eye and the wire connected to his eye as a small piece of technology connected to his upper back). He also holds a cane as his main weapon which can be seen in the game when meeting him.

Capek and Parker meeting face-to-face for the first time. 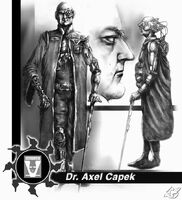 An art render of Capek