The automatic turret is the successor of the sentry turret used by the Ultor Corporation during the First Martian Revolution. The auto turret is a double barreled stationary machine gun firing high caliber rounds in a rapid-succession. Like it's predecessor it is rarely encountered in-game. Unlike the Ultor sentry turret this version cannot be manned and can be only used in the automated target engage mode. The turret cannot tell the differance between enemy and civilian as it can be seen during the Public Information Building chapter where the turret gunned down a civilian when he entered the turret's range. The best way to dispose these turrets is to use explosive weaponary but if the player is able to get behind the turret he/she can plant an explosive charge on it. 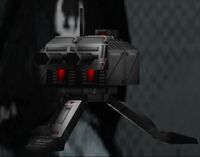 The Auto Turret in the bonus materials section.
Community content is available under CC-BY-SA unless otherwise noted.
Advertisement