Red Faction Wiki
Register
Don't have an account?
Sign In
Advertisement
in: Battles/Engagements, Battles in the Plague Armageddon

The Assault of Central Hive Mind a major assault during the Plague Armageddon by the joint offensive of Red Faction and Marauder on the plague Queen's nest after they had successfully defended the Marauder states and drove back the Plague. They also collect from the data of the Noella's necklace that contains the information of where the Queen is actually at; led by Darius, Frank, Kara and her partner going two separates paths. Where Kara and her people try to retrieve back a Mantis Heavy Walker to provide support for Darius' assault of the Alien Nest beneath the old abandoned Ultor Corporation Site, where the Queen is hidden in.

In the River of Magma[]

First, Frank and Darius try to getting into the backdoor magma to destroy the generator that leads directly to the Queen. Before Kara does due to the Lava the Heavy Walker will melt, if the magma does not clear from it. Darius activates three of the generators of the force field guarding inside of the Magma. It is the only way to go inside to end it once and for all. When getting near to the magma. The door to the backdoor is jammed and the electricity has been cut off ever since the Invasion began. They have no choice but to finding an alternate way to enter. Eventually, they go inside the backdoor and destroying all around the forcefield that guards the magma and successfully inside to the plague nest barely before they get slaughtered.

Inside the lair of the Plague[]

They go inside of the nest, but get ambushed quickly by the Berserkers as they are preparing to fend off right before they firing the shot. A Mantis Heavy Walker comes out and help them to clear their way as Kara have makes it as well. However, they call Frank and the others to go back and defending the states. While Kara and Darius goes inside to find the queen and slay it. While advancing deeper and deeper of the abandoned facility and discovering of the heading way following by the breeding of those aliens before the First Martian Revolution ever happened, While at the half-way the terrain becomes very unstable as they hold on the Walker, goes straight down and fall as the vehicle is heavily damaged after the fall. They leave with no choice and quickly repair it as S.A.M. tells them, they are not spotted yet. In half-way, they look at each other and laugh after their dirt is all around their face. Eventually, they kiss as S.A.M. warns Darius of his blood high pressure and doesn't analyze the danger as the Aliens ambush them and ultimately one of the tentacles stabs Kara and drags her away. However, It is very notice that she is still alive somewhere deeper underground. Darius has no choice but to leave, only going deeper and much deeper to seek out the Queen and slay it for good. The Walker is finally repaired , however, the shield must power up before It goes off again. While making it to the unstable side, S.A.M. warns him not to cross and he doesn't listen. Thus, the terrain falling down and the Heavy Walker is completely destroyed. As Darius think of Kara being slay by the plague . He is the only hope, that can stop the outbreak and he goes on a personal vendetta to destroy the queen.

Alone by his own[]

The struggle begins as S.A.M. continues analyzing a way to get to the Queen as he spotting the blockage of Tentacles and blocking the passage way to the Queen. As each wave after wave, he fought and fending off and eventually, reaching the below of the of the Giant Life-from that S.A.M. has detected to be the Queen. As he going up and up as seeing and killing more aliens then ever. Ultimately, Darius comes face-to-face with the Queen. In the Battle of head to head. As she spits from her mouth to attack. S.A.M. tells him to shoot the spot of her that have the bright spot and that hurts her, while she continues spawning her children to kill him. Until, in the half-way she change the spot by splitting a laser from her mouth. But however, he is able to dodge it and hit the bright spot. Ultimately, she falls, but not without having her power to destroy the whole planet. While S.A.M. calculates their weakness is pure clean Earth-air. Telling Darius it is the only way to end this madness and the Nano Forge can repair the damagedTerraformer. Thus, riding one of the Tentacle up to the surface to find the Tower. Skirmish at the Terraformer is about to start. 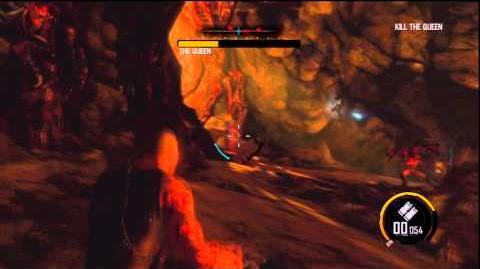