The Assault Rifle is a weapon created by the Red Faction and used for their personnel military purpose to guard safe from any threat. It is the standard weapon of Red Faction: Armageddon.

The Assault Rifle are standard issues for all the Red Faction personnel during the engagement threat for peace time. It originally based on the blueprints of the EDF Assault Rifle, though its stocky, tri-barreled design bares little resemblance after much tinkering over the years.

It fires high velocity rounds out of a 36-shot-magazine. When upgraded with extended magazines, it fires 45 Shots. Darius can carry 180 bullets or five magazines in total. It fits a Red-Dot style Sight. It also has a very low recoil which making it a good medium-long range weapon.

Darius armed with the Assault Rifle

Darius opening the Assault Rifle in conjunction with the Berserk ability 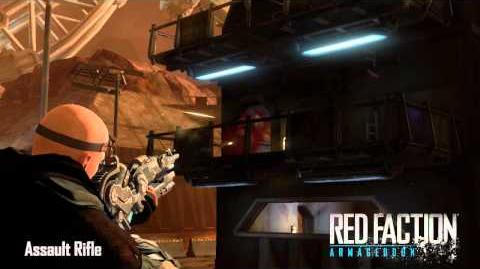