Alias Burke is a Nanotech-Enhanced Soldier from the Commonwealth and a member of Earth's Red Faction, he is the main protagonist in Red Faction 2.

Alias Burke is a former citizen of Sopot City. Generally he has nothing to do and felt homeless when he really isn't. He grows tired of Sopot's command over the city so he decides to join the Sopot Special Forces (SSF) to get rid of the boredom. It is then, when doing a special ops mission. He, aids by others of the SSF, and his commanding officer Mandril Shrike, is ordered to retrieve an experimental device called a nano cell, which contains vital information. He boards a military dropship, escorted by 2 military gunships, and fled to the N.A.N.O. Military Research Facility. The base was heavily guarded with troops, auto turrets, towers, and more. The mission landing went to a blast as most of the soldiers are met by troops armed with WASP Rocket Launchers, Alias turns out to be the only survivor of the landing. He has to assault the base himself, which is difficult, he is ordered to take out four watchtowers in order for the rest of the SSF to secure the area, he succeeds and infiltrates the base. Lightly guarded, he breaks through the base's defences and retrieved the Cell. The base somehow initiates a self-destruct sequence, meaning the cell powers the base's reactor and by taking it out, the base becomes unstable. He manages to get out the base, shortly before it self-destructs. As soon as he returns outside, a dropship lands just in time to extract Alias. As soon as the dropship takes off, the base goes into supernova, causing a three-radius explosion. A year later, Alias and Shrike are taken to the Nanotech Laboratories to be experimented on, along with four other experiments: Repta, Tangier, Quill, and Crate Molov.

Quickly fearing the potential of his new nanotech supersoldiers, he orders them all to be hunted down and executed at once and replaced with far less intelligent, mutated horrors known as "The Processed".

Collectively betrayed by their leader, the Squad flees underground and ally themselves with the Red Faction as mercenaries. The Red Faction, at this point in the story, is a more organized resistance movement that is strongly opposed to the rule of Sopot and the skewed political tenets of The Commonwealth. The Squad eventually pursue Sopot and neutralize all opposition in their way as the Red Faction also takes the conflict to the streets, in a joint uprising against the rule of The Commonwealth. During the course of the initial stages of the game, the Red Faction and the Squad mutually support each other as they overcome shared objectives which include minimizing civilian casualties and sabotaging propaganda installations. The joint uprising culminates in successfully trapping Sopot in his missile silo and executing him with the exhaust flames of an ICBM he had planned to fire in another political move to undermine the goals of (or annihilate) the Red Faction.

Back at the Red Faction headquarters, a profound turn of events occurs. Alias returns to the makeshift base of operations, only to discover that all of the Red Faction resistance members present have been brutally slaughtered. Molov remarks that with Sopot dead, and with the nanotech research in Molov's possession, the Commonwealth's military forces have voluntarily pledged allegiance to Molov. He declares Alias and Tangier to be enemies of the state for supporting the Red Faction. Also present is the leader of the Red Faction forces on Earth, a civilian named Echo, who explains to all of the Squad's members that the Red Faction had no intention of misusing the Squad's participation and alliance in the joint uprising. Echo tries to explain that the Red Faction's ultimate goal is to bring about peace. Molov, enraged, retorts that a declaration of peace would defeat the purpose of their existence as soldiers. As Molov is about to fire his weapon he is held hostage by a cloaked Tangier, who buys the three characters enough time to make an escape with their lives. The three split up, and agree to meet in a more discrete location to plan a way to stop Molov and his army of nanotech supersoldiers. The remaining members of the Squad, die-hard soldiers to the core, give chase with military orders to hunt down and execute the three fugitives.

Shortly after fleeing to safety, Alias (now working alone) lends impromptu aid to surviving Red Faction members who are defending themselves from the enemy. While Tangier embarks on a solo Black Ops mission to uncover more of Molov's plot, Alias and Echo meet up in a secret location to discuss an alternate strategy to stop Molov's current course of action. At that moment, Echo is brutally gunned down by a rail charge; Quill and her specialized railgun have openly challenged Alias to a duel. Alias tracks down the trajectory of the lethal gunfire to an abandoned cathedral, where Quill and her detachment of troops and Processed nanotech mutants do battle with Alias. Alias successfully out-guns the Squad's sniper, and Quill tumbles through the rosette window to fall to her demise. Alias claims her weapon as a grim trophy of sorts.

Tangier radios Alias soon afterwards, and the two agree to shut down Molov's commandeered Nanotech Laboratory, located within the colossal Statue of Sopot. Upon a safe arrival, the two operatives split up for maximum effect. Repta makes his appearance, distracting Alias with both distracting gunfire and deploying Processed mutants and unleashing Molov's newest creation: a more refined Processed mutant that is stronger and more resilient than the initial Processed. Alias continues pursuit of Repta into the Industrial Processor, located within the base of Sopot's Statue. The area is littered with a confusing network of catwalks, where Repta lurks with the high ground advantage and a anti-personnel grenade launcher. Eventually, Alias triumphs and shoots Repta off one of the catwalks, sending Repta plummeting into the irradiated processing ground below. Alias claims Repta's abandoned weapon as he continues his climb up the base of Sopot's Statue and destroys the Nanotech Laboratory's three power generators. The collateral damage from Alias's explosives weakens the foundation, and renders the statue's infrastructure unstable.

Alias eventually encounters Repta again, who has been driven into a nearly homicidal rage from surviving the previous encounter. The nanotechnology within Repta has been further enhanced, destabilizing Repta while augmenting his capacity for combat; Repta has been processed into the ultimate killing machine, and summons Molov's Nanotech Enhanced Forces as reinforcements. In addition, Repta is engulfed in an energy field that disrupts nearby present nanotechnology, subjecting the player to reversed player controls at inopportune moments during the fight. As Alias triumphs once again, the energy field within Repta reaches critical mass and Repta violently explodes.

Alias and Tangier meet up once again and pursue Molov, who is scaling the heights of Sopot's Statue. During the pursuit, Molov's most powerful subordinates launch a counterattack in order to distract and slow down the two operatives. Molov has taken the Nanotechnology – the culmination of Capek's nanotechnology research (see Red Faction) – and awaits extraction from Shrike. In an ironic turn of events, Shrike betrayed his commanding officer, declaring that a grievous error in judgment has been made, Tangier manages to reclaim the Nanotech Cell from Molov's possession and uses a grenade to cover her escape as she dive headfirst off the observation deck of Sopot's Statue.

Molov, desperate to eliminate his enemies and traitors, climbs aboard a nearby battle armour and launches a frenzied assault against Alias and the player's entire collected arsenal. Shrike, in his own close air support craft, patrols the area around them and maintains vigil. Using the destructible environment to his ultimate advantage, Alias manages to evade Molov's fire and launch a counterattack that not only kills Molov once and for all, but also begins to destroy the battleground located within the statue. As the statue crumbles under its own weight, Shrike swoops in to extract his teammate in the nick of time.

Sometime after the end of the Commonwealth Civil War, Alias went to Mars for unknown reasons and perished there, it's unknown how he died or why he was on Mars but it's speculated (if the best & good ending are canon) that he was an ambassador from the Commonwealth and was sent to Mars for a diplomatic mission or for military purposes (giving his experience) either by himself or with others to assist the Red Faction on Mars only to be captured and executed by the Earth Defence Force at some point during the Second Martian Revolution.

In the north of the Eos Sector in Red Faction: Guerrilla, there is a radio tag he recorded before his death. In his brief message, he says how he misses the other main characters from Red Faction II and how he wasn't expecting to die on Mars. 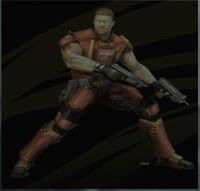 Another concept of Alias 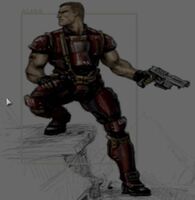 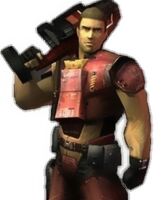