The AHC-36 Military Gunship is an aircraft used by Commonwealth and Red Faction for air support during the Commonwealth Civil War.

After the fall of the Commonwealth government and ending threat from Nanotech Enhanced Forces. It had been provided as transport for civilian to travel one state to another.

This version of the Aesir Fighter takes aerial combat to the next level when compared to its predecessor from 5 years ago. Designed for airborne combat in Earth's atmosphere's Aesir 2.0 utilizes a 30mm, 8 barrel SOP-8BG Gatling gun as its primary source of firepower and can dispense rounds at an extremely high rate of fire. In additional to 30mm rounds, this craft is also capable of launching high-powered rockets from each of its left and right ports. These rockets are highly effective against tougher opponents and can easily pierce through even the toughest armor. While the Aesir is rumoured to capable of flying at speeds up to 400 knots when at full throttle, its enhanced manoeuvrability at lower speeds make it well suited for urban combat environments.

Shrike, the vehicle specialist in Molov's squad, typically commandeers a customized version of the Aesir 2.0 giving it increased firepower, spped, and durability. The fighter also rumoured to directly interface with Nanotechnology enhanced soldiers. Not only does this make the fighter more manoeuvrable than normal, the gunner can devastate the battlefield with optical zoom and more precise control. 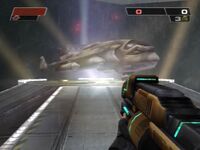 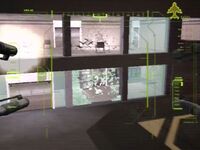 Alias manning the Gunship inside to engaging Sopot's forces

AHC-36 Military Gunship in the extras

Police variant of the AHC-36 Gunship 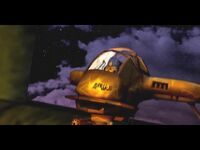